The International Conference on Thinking XIX was interrupted due to the Covid pandemic. ICOT XIX is now scheduled for December 28, 29, and 30, 2021, in Howard County, Arkansas.

The mission of the International Conference on Thinking®

is to invite to one place the most skillful and influential

problem-solvers to identify researched solutions for

humankind’s most difficult problems and promulgate

those solutions to "The Grass Roots", the basic institutions of society, 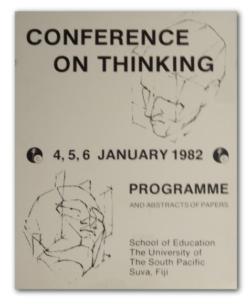 ICOT was founded in 1982 as the world’s first fully inter-disciplinary academic conference.

Our first focus was to reexamine the specific problem of falling intelligence in the human species.  The presumption was and is that all serious problems are complex and require the full lenses of every perspective, every discipline, to be completely remedied.  From the first, ICOT I, to ICOT XVIII, the focus was on how to improve the intelligence or thinking skills of the human species.

ICOT I took place at the world’s most international university, The University of the South Pacific, Suva, Fiji, which is, in effect, the “national university” of then eleven, now twelve, English-speaking independent island nations of the South Pacific.  Later, the Marshall Islands joined the initial eleven in sponsoring the University.  The core issue in 1982 was the falling IQ and decreasing emotional intelligence of children around the world brought on in part by the breakdown of the nuclear family, the negative influence of television, the waning influence of religion, and the lowered status of teachers.

The first ICOT was initially and enthusiastically supported by the Vice-Chancellor of the University of the South Pacific, Dr. James A. Maraj, former Deputy Secretary-General of the British Commonwealth, and by the world’s number one authority on deliberate curricula for teaching all known thinking skills, Professor Edward de Bono of Malta and England.  Professor de Bono also possesses doctoral degrees in medicine, psychology, and philosophy from the universities of Malta, Oxford, and Cambridge, and is the author of over 50 books on thinking.  Equally enthusiastic to support such a breakthrough conference was the Government of the United Kingdom in the person of Mr. T.H.L. Matthews, Director of the British Council for Commonwealth Affairs.

These conferences, planned for every 2 ½ years, alternating hemispheres, grew from 250 scholars from 41 universities in 14 nations at ICOT I, in Fiji, to  847 scholars at Harvard University in 1984, to over 3,000 in such cities as Auckland, Harrogate, and Cambridge, Massachusetts, again, at MIT,  Melbourne, Singapore, and Stockholm, etc.

Now, to close a cycle and the year 2021, ICOT XIX will sharply focus on five researched remedies for the world’s 400-year-old virulent problem of racism which threatens to bring down the world’s strongest democracy, the United States of America. 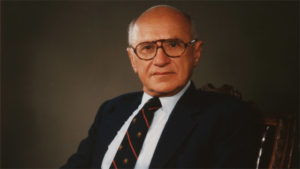 Nobel Laureate Milton Friedman in 1962 published his classic, Capitalism and Freedom, which offered the world the surest route to ending racism, not only in America but everywhere. Professor Friedman’s six-page remedy is summarized on one page below.

The International Conference on Thinking® will invite 100 of the most skillful Thinkers in Howard County, Arkansas, to

to demonstrate a widely misunderstood principle of democracy:  That principle is that grassroots persons, ordinary humans, when inspired, are better problem-solvers in societal matters than the most powerful or the most educated persons.  Professor Friedman pleaded with the leaders of “private financial institutions and non-profit institutions such as foundations and universities to develop this plan.”

Just before he died in 2006, Professor Friedman told this writer that no financial institution, no foundation, and no university had ever attempted to heed his plea.  Thus, as so often happens in history, the most powerful persons and institutions are bereft of VISION. At this perilous moment in history, no leader has had the courage to champion Professor Friedman’s remedy, nor the other five researched remedies for racism.  Professor Friedman’s Remedy was not only sound in educational logic, it was confirmed as economically sound (that is profitable, that is, yielding on average at least 14% return on investment) one year later by another Nobel Laureate, Professor Theodore Schultz, also of the University of Chicago, in his book, The Economic Value of Education, Columbia University Press, 1963.

The 100 best thinkers in Howard County, Arkansas, will demonstrate a most fundamental principle of Democracy:  That all humans, regardless of education, class, or race have the capacity to solve any social problem when assisted by the Holy Spirit.

The 100 Howard County citizens will be 60 mature, successful thinkers and 40 entrepreneurial-minded, exceptionally intelligent young thinkers between the ages of 12 and 25.  We will meet for three days in Nashville, Arkansas, to begin designing specific strategies to implement Professor Freidman’s educational Remedy in America and around the world by improving a draft of a business plan explicitly to implement Professor Friedman’s remedy for racism.  Those invited may be nominated by anyone of Howard County or elsewhere. The exact location and further details will be sent to those who will have been nominated and then invited to participate in this CONSULTATIVE, PROBLEM-SOLVING International Conference.  ICOT XIX will also accept up to 20 nominees from anywhere in the world.