A Brief History of the International Conference on Thinking®

The Humanities faculties of the University of the South Pacific unanimously voted in 1979 to approve the suggestion to host an international, interdisciplinary conference to explore the research related to teaching thinking skills, problem-solving skills. We also wanted to attract our university’s other two schools (the natural sciences and the social sciences) and concerned academics and educators around the world. The premise was that none of the great problems, such as a decrease in intelligence in under-educated children, belonged to any one discipline. This particular problem could be understood and “fixed” by multiple lenses, the lenses of education, psychology, sociology, philosophy, religion, even the aspects of the brain studied by physicists, biologists, and anthropology. The “fix” would have to be informed by the architecture, the engineering of the environment in which the learning takes place.

The University Vice-Chancellor, Dr. James Maraj, immediately authorized $2,000 for the project. I formed a planning committee, telephoned the world’s most prolific author on thinking, Dr. Edward de Bono of Malta and England who holds five doctorates from such universities as Malta, Oxford, and Cambridge. Dr. De Bono immediately agreed to be the Keynote Speaker. Then I telephoned the top international educational executive of the British Government, Mr. T.H.L Matthews, who immediately and enthusiastically and in an un-English-like fashion exclaimed, “Professor Maxwell, you are in luck. I just checked my budget yesterday and can afford to send three scholars/scientists. Who do you want?” The U.S.A.I.D Director in Suva, Fiji, arranged for the U.S. Government to sponsor a top mathematical educator from the University of Massachusetts, Professor Jack Lochhead.  Finland agreed to send its top sports psychologist and a member of its National Olympic Committee, Laura H. Jansson, etc. We were off to a brilliant start.

The planning and marketing took more than two years. The first International Conference on Thinking convened at the new conference facilities of the main campus of the University of the South Pacific, Suva, Fiji, on January 4, 5, and 6, 1982. The excitement was palpable as this was the first such fully inter-disciplinary, international academic conference in the world.  We convened to consult on solutions to a specific problem, and in an extraordinarily beautiful South Pacific setting overlooking Laucala Bay, Fiji Islands.

Further enhancing the excitement was the international celebrity status of several of the participants who had flown exactly halfway around the world, Edward de Bono, a Rhodes Scholar with five doctoral degrees and over 50 books published; Don MacKay, one of Britain’s most published physicists and who had recently been chosen to head Britain’s first brain science research center at Keele University; Margaret Boden, Britain’s top authority on artificial intelligence, and a former student of Harvard’s Jerome Bruner, America’s most famous cognitive psychologist at the time. (Professor Bruner wrote the Preface of the book summarizing the Conference.[1])  Richard Dawkins, the most famous modifier of Darwin’s theory of evolution and the author of “The Selfish Gene,” and who later occupied the Darwin Chair of Zoology at Oxford, rounded out the representatives sponsored by the British Council.

The enchantment of the event was captured when exactly as the dinner bell rang for us to file into the Campus Bure (Fiji style traditional Ceremonial Hall) for the Farewell Dinner, a golden full moon rose over Laucala Bay, sending goosebumps down the spines of many participants. The synchronicity would have thrilled the father of spiritual psychology, Carl Jung.

The Conference proceedings were published by The Franklin Institute Press, Thinking: The Expanding Frontier, (William Maxwell, Ed.), Philadelphia, 1983.  From the Introduction:

“The primary goal of the Conference was to help accelerate the clearly-evident trend toward giving more emphasis to teaching thinking skills . . . “, which, unlike many other skills, never go out of date.

The three-day conference inspired the premier cognitive psychologist in the world, Jerome Bruner of Harvard, to write an encomium to the event in the Preface: “It is an interesting twist of history that a gifted group of scholars should gather  . . . in Suva, Fiji, to discuss the nature of human thought . . . The Fiji Conference was indeed about the nature of mind . . . I was not there, alas, and now that I read these pages am full of regrets.”

Almost every attendee declared this to be “The best Conference I’ve ever attended.” The attendees voted unanimously to continue meeting every 2 ½ years, alternating hemispheres.  The second was at Harvard, the third at Hawaii, the sixth at MIT, the eighth at Edmonton, Alberta, Canada, the Ninth at Auckland, the tenth at Harrogate, England, etc. Eighteen ICOTs have grown from 250 to over 3,000 in Singapore, Melbourne, and Stockholm.  ICOT XIX will be held in Arkansas in December 2021.

The International Conference on Thinking II was on August 19 - 23 at Harvard University, attended by 847 persons with nearly 200 being turned away because of Harvard’s space limitations at the time. Highlighting the Conference were Edward de Bono, of course; the first Minister for the Development of Human Intelligence in the world, Professor Luis Alberto Machado of Venezuela; and Yale University’s foremost neurophysiologist, Professor Charles F. Stevens. The organizer of the Harvard Conference soiled the event, however, by inviting one of his heroes, the most famous published racist at the time, Arthur Jensen of the University of California, Berkeley.  (Jensen had no interest in solving the problem of falling IQ’s.  His famous paper on IQ, Harvard Educational Review, Fall, 1969, was found by Professor Jerome Kagan at Harvard to have included 32 errors of fact or calculation.)

The third was at the University of Hawaii, with over 1100 participants. By now it was obvious that the “Deliberate effort to teach thinking skills as a base for all education,” started by Socrates and Aristotle had been reborn, thanks to Professor De Bono. The conferences were so successful that greed invaded our movement and a non-tenured faculty member at Harvard saw the conference as a stepping-stone to tenure, eminence, and money. So he, being White and at Harvard, persuaded most of the board that I formed that the founder of these conferences, being Black, was not qualified to carry these Conferences forward. That person then convinced the hosts of most subsequent ICOT not to invite the founder.

Urged by Professor de Bono, Dr. David Perkins relented and invited the founder of these conferences to host the XIth Conference in Phoenix in 2003 where multiple disasters beset ICOT XI.  Despite an award of $50,000 by the City of Phoenix to market the Conference, a Russian-born person of unknown income and affiliation, Nick Zeniuk, had infiltrated earlier conferences and volunteered to attract to ICOT XI several of his high placed “friends” such as Peter Senge of MIT and General Michael Hayden, Director of the National Security Agency. About four weeks before the Conference was to open, Zeniuk sent emails to hundreds of registered participants that the Conference had been canceled. He informed the 25 top Chinese scholars who were awaiting visas that they would be refused entry into the U.S. because of the SARS epidemic. This of course was another Russian lie. Mr. Zeniuk also somehow persuaded the three rectors from North African Islamic universities to withdraw from the Conference shortly after the opening ceremonies.  A month before the Conference was opened the Conference computer was hacked into and we lost the email addresses of over 1,000 participants.  Yahoo refused to assist us to investigate the source of the hack, believed to have been engineered by Nick Zeniuk’s associates.

Despite the nefarious sabotage, nearly 900 attendees registered for the Conference which was opened by the Rector of the oldest university in the world, Quaraouiyine University in Morocco.  The major newspaper in Phoenix, The Arizona Republic, carried a planted front-page story headlined, “The Wheels fall off” the Conference. At the same time, the Russian operative, Nick Zeniuk, arranged for a “Management” thinking conference to take place, but across town, to feature MIT’s Peter Senge and those who had signed up for the “Management Track” of ICOT XI.

Despite the unprecedented and widespread sabotage, some balance was achieved.  NHK Television of Japan sent a full crew to film the event parts of which were later repeatedly broadcast across Japan.  And, one of Hollywood’s most successful conductors, Russ Garcia who was famous for being music director at several Hollywood film companies and NBC, and for scoring Charlie Chaplin’s Oscar-winning song “Smile,” flew up from New Zealand with his wife Zina, to spend a month planning an enchanted evening of great music with the Phoenix Symphony Orchestra and several of his most accomplished musician friends.

Despite the multiple sabotages, most of the 850+ attendees from around the world, including the most famous scholar of the South Pacific cultures, Professor Ron Crocombe of the Cook Islands and The University of the South Pacific, sometimes called “The father of Pacific Studies”, praised the unique focus and quality of the Conference.

The U.S. Government acknowledged William Maxwell’s ownership of the name, “International Conference on Thinking” by issuing to him Trademark Number 5,641,746, on January 01, 2019.

Above plus one representative at all subsequent conferences3

A seat on the Planning Committee 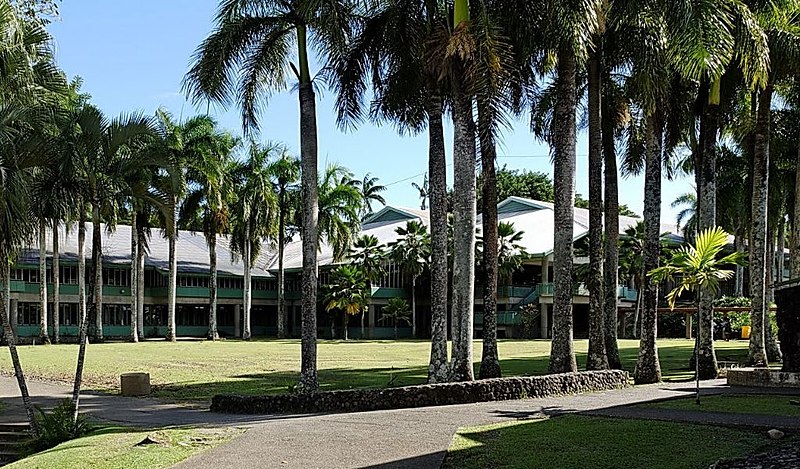 University of the South Pacific, Suva, Fiji ICOT I, January, 1982